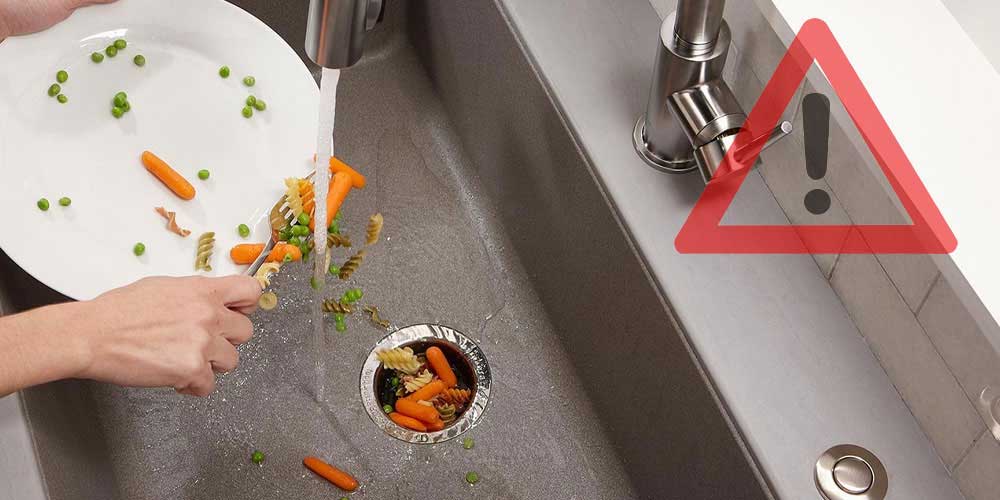 What can you put down a garbage disposal and what not to put in a garbage disposal; people often seem confused when it comes to the type of kitchen waste they can wipe down the sink. While manufacturers may confidently boast the power of their disposal units approving them of being able to mulch any kitchen discard, it may not be the best idea to do so. If you consistently practice throwing down all kinds of countertop wastes down the garbage disposal, you may be unknowingly threatening its longevity.

Things Not To Put In Garbage Disposal

Your garbage disposal is different from a trash can, period! The fact that this has to be emphasized says enough about how it is generally perceived in domestic kitchens. You must abstain from putting grease and oil down the garbage disposal.

If you do so, the grease can accumulate and slowly hinder the grinding ability of your garbage disposal. It can also give rise to clogged drains and can reduce the overall functionality of the garbage disposal. Furthermore, it can disturb the disposal system in your neighborhood area.

These grounds cannot be disposed of off directly in the garbage disposal, while coffee powder may seem fine in texture; they still can stick to the pipes when wet. The coffee grounds can then eventually convert into the sludge to ultimately reduce the efficiency of your disposal.

Pasta and rice have a tendency to puff up after cooking. These are yet another things not to put in a garbage disposal. Flushing them down in your garbage disposal can result in the stoppage of water going down the pipe. Rice and pasta can get swelled up and can result in a thick paste when clumped together.

This paste can block the pipes, resulting in a nasty disposable garbage system. It can further affect the overall maintenance of your disposal system and can also reduce its efficiency.

Can you put chicken bones in a garbage disposal? Although garbage disposals have sharp blades for disposing of and grinding wastage, you should still avoid throwing bones down the disposal. While small bones pose less harm to the garbage disposal, large bones can cause corrosion and clog your drain pipes.

The garbage disposal blades aren’t strong enough to break down chicken bones so it is better to carry out precautionary measures. Small bones aren’t much to be worried about, so you should definitely avoid throwing off large bones at the disposal.

Chemicals can cause serious corrosion and other reactions when disposed of in the disposal system. Since most of the garbage disposal systems are made up of steel, they can corrode after being in contact with chemicals such as bleaching powder, acids, and other chemical agents, etc.

Hence, you should abstain from flushing down chemicals into your disposal.

Oatmeal has a similar tendency of swelling up just like pasta and rice. So what do you reckon? Can you put oatmeal down the garbage disposal? Of course not, for the same reason. Since the walls of the garbage disposal are wet, uncooked oats can pass through the pipes and expand when contacted with water.

Nuts such as peanuts, cashews, and other varieties of nuts shouldn’t be flushed down the garbage disposal. They can turn into a paste upon breaking up by the blades. Furthermore, they can line your drain as their texture is of a sticky and thick paste.in other words, it can be very difficult for you to clean out your drain.

This gooey mass can end up breaking down the motor of your garbage disposal and can cause the impeller to be jammed up.

Vegetables having fibers such as lettuce, kale, celery, asparagus, artichoke, rhubarb, etc. are also not meant to be thrown down the garbage disposals. The strings of the fibers can get caught up with the blades of the disposal system.

Additionally, they can also be tangled up while going down the disposal. Instead, you can try to convert them for compost or toss them in the trash can safely.

This thin layer can get past those blades and can eventually act as a trap for more items while sticking over the drain. These skins are safer when put in a trash can and can further eliminate drain blockages in a garbage disposal.

Not only do the grounded eggshells stick together and clog the pipes, but they can also trap and catch other items. The thin membrane on the inside of an eggshell should also not be tossed right away in the disposal.

Seafood such as lobsters, crabs, oysters, shrimps has hard shells they tend to form a garbage disposal menace. These shells are hard, dense, and cannot be ground easily for the easy passage down your disposal system. Unfortunately, they can end up breaking your system due to their hard texture.

Carrots when peeled can result in some sort of carrot skins. These peels can make up a mess in your garbage disposal since they can tangle around the disposals grinder.it can create problems with the overall maintenance of the disposal system. Carrot peels should be thrown away in a trash can either.

Corn husk is also a sort of fibrous silky thread that can get in between the smooth working of your garbage disposal. The kernel can be managed but not these husks. They can jam the motor and cause the drain to clog. These husks can either be thrown in the trash or can be used to make compost instead. Remember, you can’t put corn husks in the garbage disposal.

Artichokes also possess fibers that can get in the way of motors and can wrap themselves around shafts and blades. They tend to clog up the impeller and can break down your disposal system. artichokes do come from fibrous vegetables and hence should be thrown away in the trash instead.

Paints when poured straight into the disposal can reach out and stick to the shafts and sides of the disposal. It can eventually harden up to form a clumpy mass. Since paints are diluted, only a little amount of heavily diluted paint can be passed through the system. Little diluted paint is a big no-no for flushing down the system.

Paints when poured straight into the disposal can reach out and stick to the shafts and sides of the disposal. It can eventually harden up to form a clumpy mass. Since paints are diluted, only a little amount of heavily diluted paint can be passed through the system. Little diluted paint is a big no-no for flushing down the system.

Related: How to fix a leaking Garbage Disposal

The overall maintenance of the garbage disposal is pretty straightforward. You should run cold water through it while using. And also wash it off with cold water after it has done grinding the food. This helps ensure that all food bits are washed down the drain and that none remain at your disposal. Summing up, you now know what should be and what not to put in a garbage disposal. These were some of the items that you should refrain from putting in a garbage disposal system. Contrarily, if you happen to have been putting these down your garbage disposal and your unit still functions just fine without leakages and/or rattling noises, you know what to do to keep it that way 😉 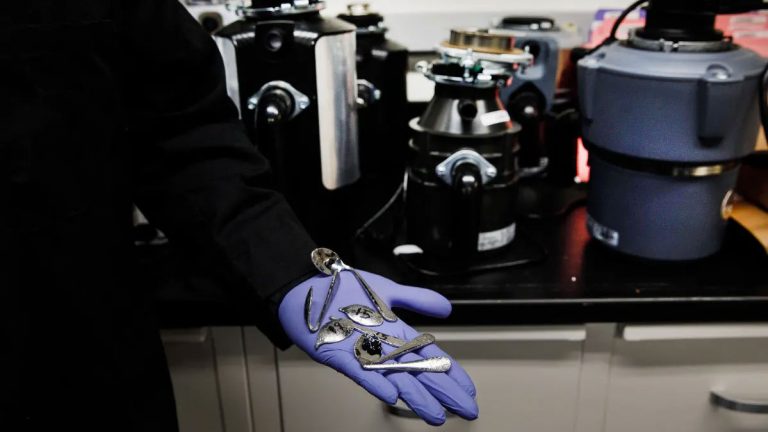 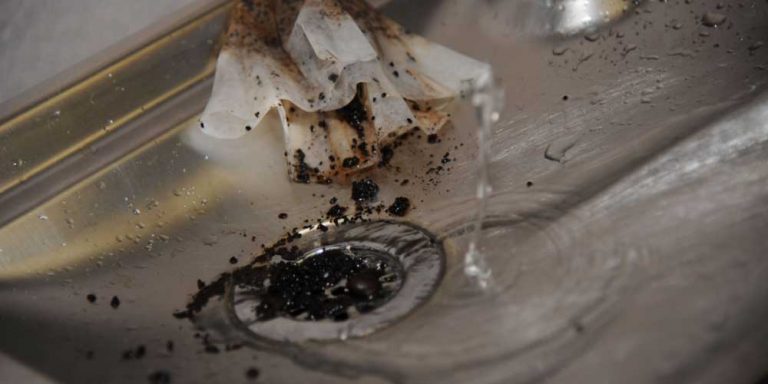 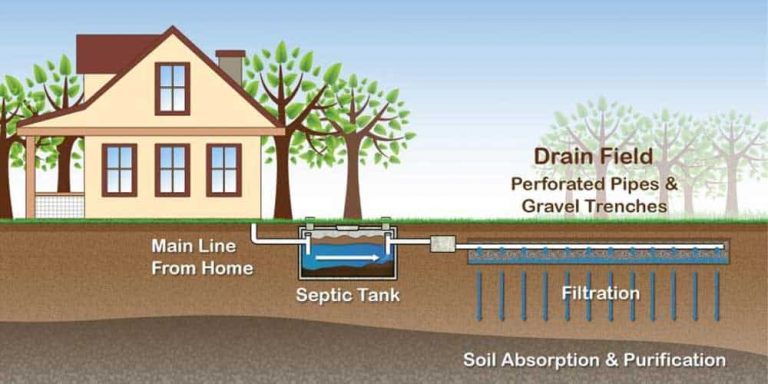 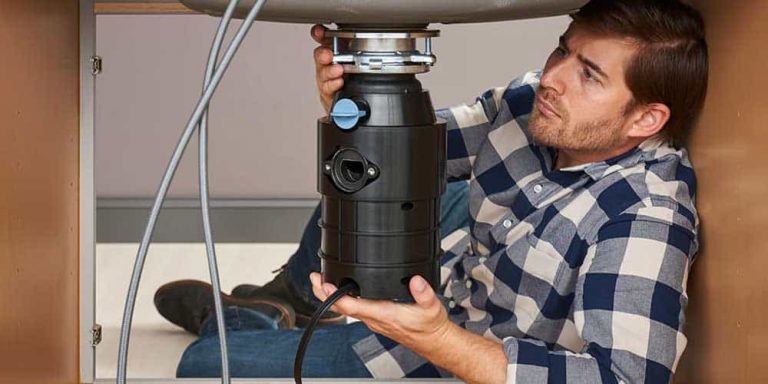 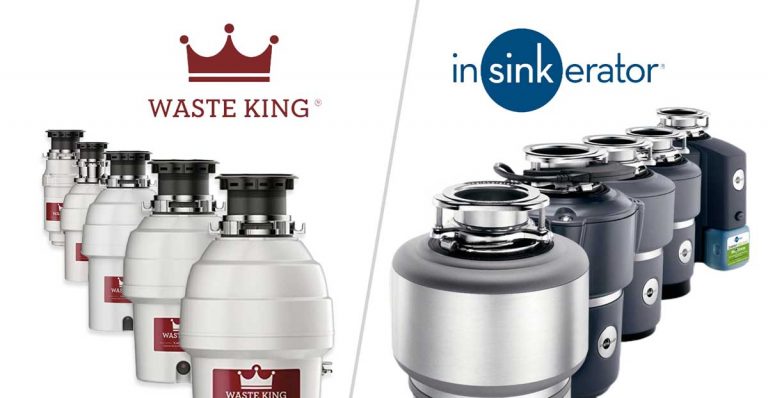 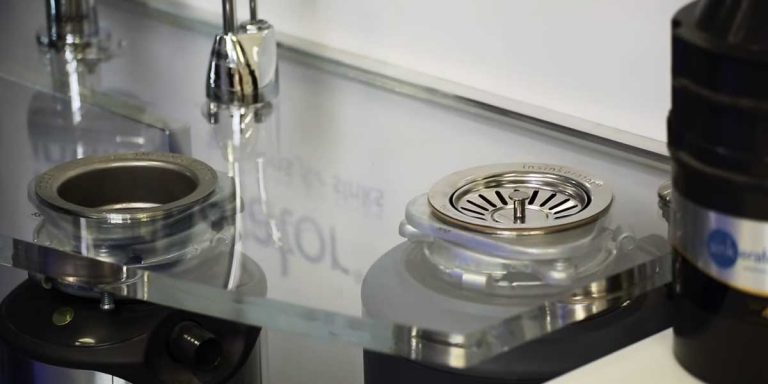